Approaches of Uddevalla Bridge during erection 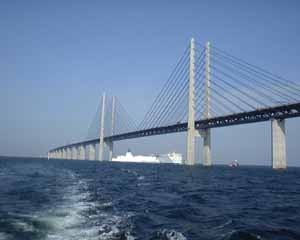 Assignments performed by StBK for
steel bridges etc. »
StBK Stålbyggnadskontroll has participated as a consultant with various assignments in a large number of steel bridges in Sweden and elsewhere. Among other things, Göran Alpsten has performed inspection of all railway bridges in Liberia on the line between the steel mines in Yekepa and the port of Buchanan, and he has participated in the preparation of the project specifications (PAD) for the Oresund Bridge project.

Assignments for steel bridges have included inspection and consulting during production, including the Uddevalla Bridge, the longest highway bridge in Sweden with a major cable-stayed structure in the main span, being a somewhat smaller version of the Oresund Bridge, the Marieholm railway bridges in Goteborg, railway bridges at Kungsbacka, tram bridges in Goteborg and renovation of the Skeppsholmen Bridge in central Stockholm.

Göran Alpsten holds a title as "Docent" in Bridge Building at the Royal Institute of Technology KTH in Stockholm, and has performed various expert assignments concerning steel bridges, for instance, for some structural parts of the Hogakusten Bridge, a major suspension bridge in the north of Sweden, and participated in failure investigations for highway and footpath bridges. He has participated in the development of the steel part of the Project Application Document (PAD) for the Oresund Bridge and of sections of the national specifications for structural steel in bridges issued by the Swedish Highway Board.

Göran Alpsten is responsible for the competence courses "TR-steel", including the "TR-steel/K" course for structural steel in bridges and other major structures.