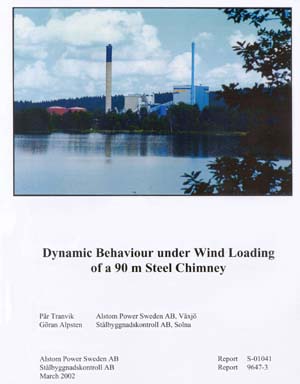 
Steel chimneys are one of the specialities for StBK.

We have designed or checked the calculations of over 1,000 steel chimneys and towers using CHIMNEY, a computer software tailored for designing and producing cost estimates and drawings of the structure in steel chimneys and similar structures with rotational symmetry, such as cyclons, pulp towers, cooling towers and flight control towers.

At present many assignments consider checking the strength of existing steel chimneys where it is desired to add antennas and other equipment for mobile telecommunication at the top. Existing steel chimneys were optimized for loading known at the design stage, and the increased wind area from additional antennas may cause design criteria to be exceeded.

A chimney with vibration problems where we have participated in extensive investigations is a 90 m steel chimney at VEAB in Vaxjo, Sweden. Fatigue cracks were found after a few months of service. The chimney was initially equipped with a tuned pendulum-type damper at the top which did not work properly.

After adjusting the damper the chimney has been monitored during a six-year period with continuous stress measurements. The results have been presented in the report by Par Tranvik of Alstom and Goran Alpsten shown here. Later the chimney was equipped with an additional friction damper using two wires attached to friction connections. The behavior of the chimney with the friction damper has been studied with continuous measurements for an additional year.

The results from the investigations of the VEAB chimney have been presented at international conferences on wind engineering in South Korea and Czech Republic, and published in the scientific journal Wind and Structures, Jan. 2005.